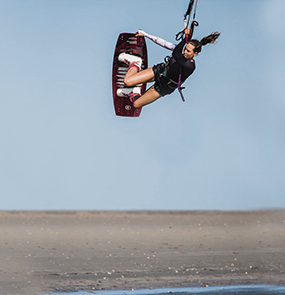 Karolina grew up in Warsaw, Poland where summer lasts for a very short time. She has lived out of a suitcase since following her kiteboarding passion and chasing summer all year round! For Karolina, kiteboarding is about freedom, fun and endless possibilities. She loves all of the different disciplines that kiteboarding has to offer. Freestyle, park, waves or foiling are always putting a smile on her face. A life without adrenaline and constant changes would be too simple for Karolina. It's about the challenges, new places and everyday excitement. This is why she followed a career in kiteboarding and never looked back! Having started kiteboarding in 2004, three years later she started travelling the world to pursue her goal to become freestyle kiteboarding World Champion. After competing in the freestyle world tour for 10 years with many ups and downs, in 2012 she grabbed her first world title. This fulfilled the dream but also gave a new direction to her life. In 2014 and 2015, Karolina defended her World Champion titles. Throughout her impressive career, she has stood on the World Tour podium 62 times, with 23 wins. After a turbulent end of PKRA World Tour in 2015, she decided to move forwards towards Kite Park Riding. The following year she won the most prestigious event in kiteboarding, the Wind Voyager Triple S Invitational, along with two other events, and got awarded the KPL (Kite Park League) World Champion. In summer 2016, she began to organise a female-specific kiteboarding festival in Poland (The Queen of HEL). The event was a great success which gave her a new direction in life. In 2017, Karolina graduated with an MA in Retail and Management and in 2018 she secured the win in the Wind Voyager Triple S for the second time, as well as the Patagonia Hood Jam and defeated the KPL title.

Kiteboarding in one of the natural wonders of the world, off the north Atlantic coast in the protected area of Lenšˇis Maranhenses National Park. Known for its vast desert, stretching on for mile upon mile a landscape of tall, white sand dunes and seasonal rainwater lagoons. Powerful winds from the equatorial Atlantic combined with crystal clear lagoons that exist for only a few months a year make this one of the most untouched areas in the world to kite board.